I Paid Cash and Flew Without Showing I.D. 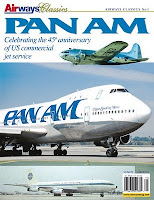 They're much like Winston in 1984, who sought out old men, trying to learn clues as to what life was like before Big Brother ruled Oceania.

Here is an example of what real freedom once looked like in America:

Back in the late 1980s (I think it was in 1986), I flew from New York City to Washington D.C. It was a last minute thing. I took a taxi to La Guardia Airport to catch the hourly shuttle from NY to DC. I think Pan Am ran it back then, but I'm not sure about that.


* I had no reservation. I don't think anyone did for those shuttles.

* I bought my ticket at the last minute.

* I bought no return flight.


I simply hopped on the plane to DC. It was like getting on the subway. A few of hours later, I flew back from DC to NY. Same routine. Cash, no reservation, no luggage, no I.D.

That's what freedom once looked liked in America.

For another peek at real freedom, see what it looks like today in Canada.
Posted by Thomas at 11:28 AM

Anti USA Police State rock music video released by American rocker who has been targeted with a decade of government oppression. Scott X and the Constitution Commandos take on corrupt and criminal acts of the government with their 4th video release (Police State USA) from their new album: "Fighting the U.S. Police State With Music".

American musician that has become totally fed up with U.S. government crimes and oppression targeting him has released a 7 song rock music album with his 4th music video detailing his experiences with the corrupt U.S.A. government. Rocker Scott X has been banished with the threat of arrest from all courthouses in the U.S. for LIFE. U.S. State and Federal governments have targeted X for over a decade with wrongful criminal prosecutions, courthouse banishments, free speech violations, double jeopardy violations and other oppressive acts.

The USA Took My Freedom Away
http://www.youtube.com/watch?v=aHCBmpfr0t4