When Terrorism Was No Cause for Terror 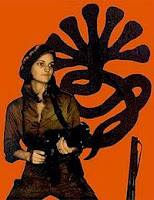 In my previous Memory Hole posts, I related what it was like to fly pre-9/11, that aid to Israel was originally promoted as a temporary measure, and that the Tea Party was originally antiwar.

Here's another historical factoid: Once upon a time, our Establishment did not exaggerate the threat of terrorism to panic the people into giving up their liberties.

It was the early 1970s. I was a child in grammar school. Terrorism often made the news. It was the era of Patty Hearst and the Symbionese Liberation Army, the Baader Meinhof gang and the Japanese Red Army, the Weather Underground and the Cuban hijackings, the Black Panthers and the Seven Crowns.

You've probably never heard of the Seven Crowns. They were a black gang. I learned about them when I was in sixth grade. A rumor had circulated in the schoolyard that the Seven Crowns were coming to Queens in New York City (where I lived) to gun down Catholic school kids. We were all jumpy during lunch break. Any loud car passing by was cause for consternation.

The rumor reached our teacher. After lunch, he told us how ridiculous we were. He explained how false rumor start and spread. Someone hears something small, passes it on, and with each retelling, the story grows.

Our teacher ridiculed us for letting some baseless fear get the better of us.

His attitude was not uncommon. Maybe a year later, I read a news article in the Weekly Reader that discussed all those terrorist incidents in the news. But the article also made an observation that I never forgot.

The Weekly Reader did the math, and pointed out how unlikely any of us might become a victim of terrorism or of a hijacking. Like being hit by lightning. The paper went on to explain that terrorism's main impact was psychological, not physical.

Why would the Weekly Reader emphasize these points? I suppose it was partially to quell the fears of children. To calm those of us who'd heard bits and pieces of terrorist stories in the news or from our parents.

Also, of course, it was the truth. As a news publication, the Weekly Reader was obligated to report the truth.

Compare that to today. The math is still the same. It's highly unlikely that any of us would ever become a victim of terrorism. And yet the official attitude seems different. It seems as if the powers that be want to scare us -- even to terrorize us -- with tales of what the "Islamo-fascists" would do to us, were it not for the TSA, NSA, etc.

What changed in the U.S. during these past 40 years? Once upon a time, we told children the truth. Now, children (and adults) are encouraged to fear rather than to understand the facts.
Posted by Thomas at 1:28 AM