In Defense of the Libertarian Macho Flash 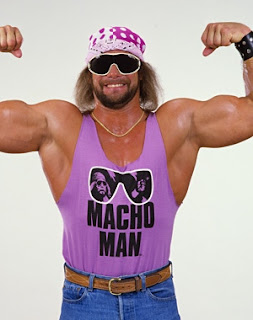 I followed libertarian politics long before I began writing about it. One of my first articles on the subject appeared in the May 2001 issue of Liberty magazine.

I enjoy looking back on these "blasts from the past" to see where my predictions came true, where I was off the mark, and to what extent I may have changed in my outlook.

In my article, "In Defense of the Libertarian Macho Flash," I advised Libertarians to not dilute their principles in trying to win elections. I told them to instead use the LP as an educational tool. I believed then, as I do now, that the LP will never become a major political party, no matter what it does, and so it should instead focus on its only real strength: education.

I've now uploaded my 2001 article, which you can find here: In Defense of the Libertarian Macho Flash.

(Above photo of wrestler Randy "Macho Man" Savage.)
Posted by Thomas at 1:18 AM