A Pragmatic Defense for Radical Libertarianism 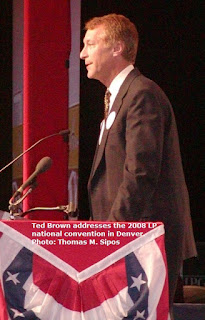 One longtime debate within the Libertarian Party is: Should the LP hide its "extreme" positions so as not to scare voters?

Should the LP dilute its policy proposals into something nicely wishy-washy?

Reform Faction types (what I call "Big Government Libertarians" because of their support for America's wars and empire) say that the LP must extensively downplay its positions, which they say are too "extreme, absolutist, radical, purist, and anarchist." A more moderate message will "win votes" and thus bring us in at least a little bit of liberty. America's wars and economic sanctions will continue, murdering 100,000s of women and children. But on the other hand, we might be able to abolish that mandatory seatbelt law. (Whoopie!)

But Los Angeles libertarian Ted Brown offers a strong argument in favor of the LP promoting a Radical message. Brown explains that you have to demand a lot, to get a little. (The squeaky wheel gets the grease.)


"In politics, you have to ask for a lot and be willing to accept a lot less.

"For example, you should demand a $1 trillion budget cut. More moderate types will say, that's a bit much, but let's cut $100 billion. But if you only demand a $100 billion cut in the first place, you're likely to get way less than that.

"The same goes for drugs. I advocate full decriminalization of all drugs, where they can be advertised on TV and sold at Rite-Aid in colorful packages. More moderate types will be horrified, but will say, we can't do that, but we can legalize and regulate marijuana. If I only sought the legalization and regulation of marijuana to start with, I wouldn't even get that.

"The moral of the story is, the LP must be there to advocate the most radical freedom-oriented solutions. Otherwise we are unlikely to see any change in our direction at all."


Brown's remarks may be found on Independent Political Report, Comment 52.
Posted by Thomas at 11:15 PM