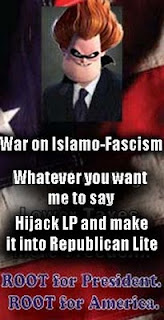 One week later, on February 10, after an outcry from Libertarians, Root did a 180 flip-flop and condemned Mubarak for being a tyrant.

This is one of Root's fastest 180 flip-flops to date. Even faster, I think, than when he announced that he would testify against Obama at Reverend Manning's Birther sham trial, only to call it off following another outcry from Libertarians.

Antiwar is my issue, but even I can't keep up with all of Root's shifting positions.

Root not only flip-flops, but he does so without explanation or apology. No mea culpas. No thought-provoking essays on why, after long and difficult consideration, he realized that he was previously wrong and these are the reasons he changed his mind.

Root's flip-flops are positively Stalinesque in their swiftness, completeness, and ignoring that there even was a change.

Recall the scene wherein an Inner Party member gives an impassioned speech denouncing the Eurasian enemy. In the middle of his speech, he is handed a revised speech. He continues his speech without missing a beat, without losing his passion -- only now he is denouncing the Eastasian enemy, as though it were always so. Nor expecting anyone in the audience to notice or object.

But most LP members are not mindless Ingsoc members who force themselves to ignore party contradictions and historical revisions.

Doubtless, if Root seeks the LP's 2012 presidential nomination, he will hope that party members will remember him only as an early leader in the opposition against Mubarak, and that his previous praise of Mubarak will be buried by Google.

LP members must remember Root's long history of flip-flops, and remind others.
Posted by Thomas at 8:23 AM