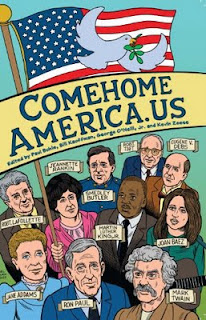 ComeHomeAmerica.us is sponsoring a non-partisan antiwar petition, calling on the U.S. to end its current wars and occupations, and adapt a new, peace-oriented foreign policy.

Come Home America. That was the refrain of George McGovern's last televised speech of his 1972 presidential campaign. He kept repeating that line throughout his speech. It was his call to bring back American troops from the Vietnam War.

McGovern had bought a half hour on network TV, on the Monday night before Election Day, to broadcast his speech. It was his desperate, last ditch attempt to reverse his polling numbers.

I remember seeing McGovern's speech on TV. I was eleven, and a Nixon supporter. So were my parents, and almost every kid at school.

I doubt the Powers That Be will heed our request, but you should sign it anyway. At least future generations will know that not all Americans were fooled -- or intimidated -- by the government.

Finally, here's a recent interview with McGovern, in which he discusses Barak Obama's current wars: