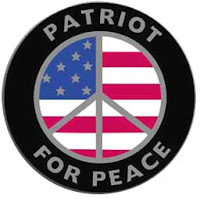 Angela Keaton and her employer, Antiwar.com, have won the 2011 Free Patriot Peace Prize. I'm not sure what that is, but according to Independent Political Report:

Their 2009 winner was Ron Paul. The 2010 prize was shared by Adam Kokesh, Iraq Veterans Against the War (IVAW), and Private Bradley Manning (whose leaks were publicized by Julian Assange).

"[2011] Free Patriot Peace Prize winners are a former member of the Libertarian National Committee who is a longtime outspoken critic of unjust, undeclared wars [Angela Keaton], and a nonprofit founded in 1995 in response to the Bosnian War [Antiwar.com]."

In addition to criticizing unjust wars, Keaton was also a critic of the Libertarian Party's retreat from its avowed principles. For her actions, Keaton was harassed off the LNC. At the time, the Massachusetts LP publicly stood up for Keaton.

I first saw Keaton when she spoke at the 2006 national LP convention, which I taped:

Keaton also has her lighter side.
Posted by Thomas at 8:20 AM