The following is written by Lawrence K. Samuels, who is the Chair of the Monterey County Libertarian Party:

Even before Anthony Gregory spoke at the Peace Resource Center in Seaside, CA, on June 20th, his topic was controversial.

Libertarians for Peace, and the Libertarian Party of Monterey County, wanted to see whether the 27-member Peace Coalition of Monterey County truly supported peace -- or were only interested in having Democrats in charge of the Iraq and Afghanistan wars.

Gregory's speech was entitled: "Is the New Boss the Same as the Old Boss: Has Obama Kept his Promises?" The title alarmed a number of peace activists who were worried that Gregory, a research analyst at the Independent Institute, would go on an "Obama Bashing" tirade. But despite that concern, the Peace Coalition voted to be the main sponsor for Gregory's speech. 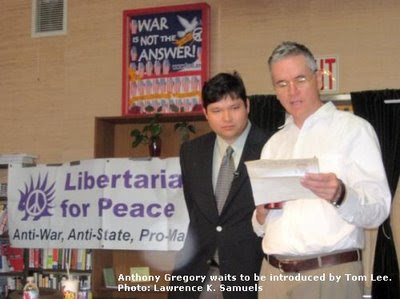 Promo flyers tried to downplay the controversy by asking: "Do all politicians promise reforms and then reform their promises, or is Obama the exception?"

According to Gregory's speech, Obama is no exception. The 28-year-old libertarian editor of the Campaign for Liberty website spent over an hour listing dozens of broken promises by President Obama. Some of Obama's better-known broken promises include:

1. His promise of transparency, saying he would give the public a five-day public comment period;

2. His promise to quickly close Guantanamo;

3. His promise to oppose warrantless surveillance;

4. His promise to withdraw completely from Iraq;

5. His promise to stop unconstitutional actions such as "state secrets" and "immunity" claims;

6. His promise to repeal the Defense of Marriage Act.

Unfortunately for peace defenders, Obama /has/ kept a number of promises -- which actually hurt peace:

1. Escalating the war in Afghanistan with 30,000 more troops;

3. More deeply involving the U.S. with the war against the Taliban in Pakistan.

During the Q&A period, one Obama supporter said that, despite all of Obama's broken promises, the public should still support the President. His cited reasons were trivial, arguing that Obama has helped to heal American society, and has restored $50 million to the United Nations Population Fund.

Gregory countered by arguing that the U.N. was an imperialist cadre, initially organized by Stalin, dictators, and Western powers to the detriment of smaller nations.

Despite their fear of a harsh bashing of Obama, many local peace activists were impressed with Gregory's speech. Most understood that Obama is no friend to civil liberties, international peace, or transparency.
Posted by Thomas at 2:43 AM No comments:

It seems that ever more Israelis perceive a militarization of Israeli society, and are refusing to serve in the military, and even going to prison for it.

Posted by Thomas at 7:31 AM No comments: