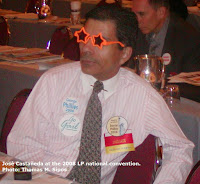 I've met José Castañeda several times, back when I was more active in libertarian circles. (Not so much since 2009.) José and I both reside in Los Angeles, so our paths crossed in local as well as state and national LP activism.

José has announced that he's running for Secretary of the Libertarian Party of California in the LPC's upcoming 2015 state convention (ironically -- and idiotically -- being held in Nevada; yet another reason for regime change).

I've already endorsed Ted Brown for LPC Chair. I know Ted Brown. And I know Jose. They're both good libertarians and would make better LPC officers than the current bunch.

Here is José's campaign announcement, which I found on Independent Political Report:


I am running for state Party Secretary. Sadly, the Libertarian Party of California (LPC) has been going in reverse and the Party leadership seems to have no clue as to the way to reverse the decline and as the way forward to success.

Proof of the decline is easy to see. Examples:

• From the 1980s to the 2000s the LPC (Party) regularly had 100+ candidates every two years. The last two elections, the Party only had about 10 candidates. This is a drop of 90%. I feel so strongly we should have candidates, I ran for State Board of Equalization District 3 last year, and assisted two others to get on the ballot.

• From the 1980s to the 2000s the Party regularly had five candidates for statewide office. Last year we only had one candidate. (He ran ran for Attorney General.) This is a drop of 82%.

More examples of the lack of Communication, Transparency, and Distrust

Questions have been asked by members as to the process used to select the city for the state convention, and the reason that city was chosen, and those questions go unanswered. Questions have been asked as to how many members have registered to attend the state convention. These questions are not answered. Requests have been made for region membership lists by officers of regions, and there have been delays in getting the region membership list to the officers. The requests have been caught up in the bureaucracy of the Executive Committee. Assistance has been asked of the state Party by county officers concerning county websites under the control and ownership of the state Party, and no assistance is given.

In the classic business bestselling book, In Search of Excellence: Lessons from America's Best-Run Companies, Peters and Waterman discuss successful companies as being transparent, communicative, and trustworthy. They say:


"We see that time and again in the excellent companies. They are obsessed about widely sharing information and preventing secrecy [between management and employees]. They willingly trade any marginal loss of competitive information for the added commitment [by employees]."

Candidates -- The LPC will have many candidates. I, other officers, and Executive Committee reps will assist in this effort. Having only 10 candidates is unacceptable.

Customer Service/Communication -– I, other officers, and Executive Committee Reps will improve customer service to regions, members, and public. We will communicate with region officers and members which has not been happening recently. We will answer their questions, respond to their concerns, and assist them as needed. Meetings that include the Party chair and region chairs will be started, will be conducted via electronic means, and will be held as needed.

Visiting regions -- I believe officers of the Party should visit regions (counties) as part of their duties. As one of my duties as Los Angeles County Vice Chair and Chair, I have gone and visited region meetings. Visiting regions gives me an opportunity to talk to members, officers, and public. I communicate and hear their concerns, requests, ideas, and so on. I will continue to visit regions and I will share what I hear with the Executive Committee.

And we must paint a picture of a California that stood for something noble once, and that can stand for something noble again. We must communicate that the Libertarian Party is the organization that will return us to those noble times, and will return us as a state to greatness, liberty, freedom, peace ... these are the concepts we must be known for.

As Secretary I will insist on a culture of transparency, communication, and trust. Such openness will help lead the LPC to growth, success, and victory, and will reverse our decline. Customer service will improve, membership will increase, we will again have candidates, attendance to our conventions will increase and we will again have 100+ delegates, the number of meetings held by the executive committee will increase, and communication between the executive committee and region officers and members will improve.

I ask for your support. Together with your help, the LPC will grow and achieve a new era of success. 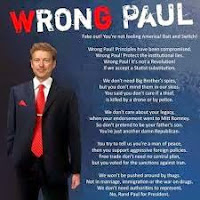