Cops Lie on Tape When They Say "Stop Resisting" 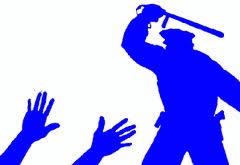 It's routine for police to repeatedly say, "Stop resisting! Stop resisting!" when making an arrest -- even if the arrestee is not resisting. This is because police are often audio-recorded on tape, but not video-recorded.

It's an especially neat piece of "evidence" if the arrestee was not resisting and the police were brutal -- such as the Fullerton Police beating of Kelly Thomas.

But don't take my word for it. Witnesses -- civilians and police officers -- all say that this is standard operating police procedure.

On May 11, 2012, a caller to Los Angeles's John and Ken Show, on KFI-AM, described how, when he was arrested -- and complied -- the officer nevertheless kept mindlessly repeating, "Stop resisting! Stop resisting!" You can hear that portion of the show here.

Then a week later, on May 18, 2012, a caller who described himself as a former police officer, told John and Ken that the police are indeed trained to say "Stop resisting! Stop resisting!" whenever making an arrest. You can hear that portion here.

So the next time you're on a jury, and the prosecutor introduces some audio recording of a police officer repeating the magic phrase, "Stop resisting! Stop resisting!" -- don't be so quick to believe it. It's possible the arrestee was resisting -- but it's equally possible the cop was lying for the tape -- and to fool you, the juror!

I've written previously about how rich Neocons are trying to purge the Libertarian Party of antiwar radicals.

Their exchange occurred on the LNC listserv, which Starchild apparently distributed (on May 12, 2012) to other listservs, which Moore then further spread.

Starchild summarizes the gist of his conversation with Root by saying:

"I bear no malice toward W.A.R., but he really doesn't belong in our party's leadership. He doesn't believe there's room for us (and by 'us' in this context I mean radicals, anarchists, Libertarians who are for opening borders, eliminating foreign aid, legalizing all drugs, etc.), any more than I think there's room for him." 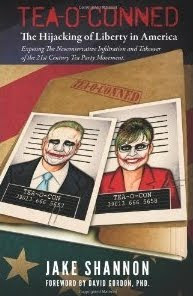 I've previously written about how the Tea Party was initially heavily antiwar and libertarian, only to be infiltrated by Neocons.

Those were brief observations and on-the-ground reports. But there's also a book on the subject. It came out in 2010, but I only recently discovered Jake Shannon's Tea-O-Conned: The Hijacking of Liberty in America. Exposing the Neoconservative Infiltration and Takeover of the 21st Century Tea Party Movement.

That's a mouthful of a title. The book hasn't received much publicity, perhaps partially because it's self-published. But neither can you expect the Neocon media to promote antiwar Tea Partiers. The latter challenge the approved narrative of pro-war rightists vs. antiwar leftists.

I haven't yet read Shannon's book, but its topic is both under-reported and critical. His book seems worth a look.

Infiltration and sabotage is normal behavior for the pro-war crowd, as demonstrated by Aaron Biterman's admitted sabotage of the Ron Paul campaign on Facebook. 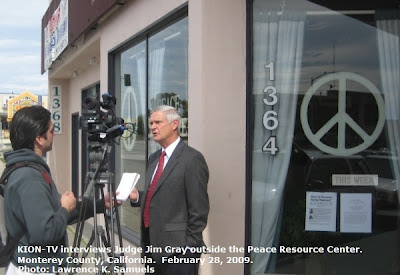 A few days earlier, on May 1, libertarian activist Carol Moore circulated a nugget from Jim Gray's political past. When he ran as the California LP's candidate for US Senate in 2004, Gray supported an Israeli/ Palestinian Unity Resolution.

It's a balanced document. It condemns all terrorism -- suicide bombers and state terrorism. It calls for a two-state solution. (As opposed to the more controversial and "extreme" one-state solution.) It takes no sides, and advocates peace and dignity for all partied in Israel/Palestine.

Despite this balance, Gray's position was condemned as anti-Semitic by a few posters on this May 2nd Indepdendent Political Report thread.

Whereas, the situation involving the Israelis and Palestinians has been steadily deteriorating into open warfare; and,

Whereas, all of the nations of the world still have not stood up together to guarantee the right of the State of Israel and the State of Palestine to exist in security and peace; and,

Whereas, there can never be a full and lasting peace in any land that does not afford and provide justice for all of its people, regardless of race or religion; and

Whereas, people of all faiths, backgrounds and nationalities have not stood up together to condemn all acts of terrorism of every nature; and,

Whereas, the people who live in the Israel/Palestine area should have the self-determination to decide the historical and emotional political issues that presently divide them; and,

Whereas, further bloodshed in the Israel/Palestine area is unacceptable and unnecessary;

Therefore be it resolved that each one of us individually and with all of our strength and fortitude guarantee, and recommend that our country and the world community guarantee, the existence and security of the State of Israel and the State of Palestine; and

Further be it resolved that all people in Israel/Palestine area be afforded and provided justice for all claims and grievances; and that reasonable compromises be reached by parties; and,

Further be it resolved that from this day forward, each one of us will decry and condemn all acts of terrorism, which are defined as the use of force by individuals, groups and/or states for the intentional injury, destruction and/or killing of civilians, which includes all forms of suicide bombings, but also includes acts like firing missiles out of helicopters to kill or injure people below, whoever they may be, and which intentionally clouds people’s ability to think and maintain an open mind; and,

Further be it resolved that questions as to the future existence of the Israel/Palestine area, such as the issue of where borders are to be drawn, and the status of Jerusalem, are to be decided primarily by the people who live there, with other countries and world bodies playing a neutral role under the guidance of the Geneva Accords.

While I'm disturbed by Gary Johnson's foreign policy, Jim Gray has a long history of promoting peace. I continue to support Ron Paul -- and have already voted for him in California via absentee ballot -- but I am pleased with the LP's vice presidential pick.

Posted by Thomas at 9:20 AM No comments:

Registered Republicans in California will be voting for Republican Party Central Committee members in the upcoming June 5, 2012 election.

The below five candidates appear to be pro-Ron Paul:

Here's a video of candidate Vrezh Zatikyan registering Republicans to vote for Ron Paul in the June 5, 2012 primary:

Please support the above five pro-Ron Paul candidates for Republican Party Central Committee if you're a registered Republican in California's 50th Assembly District.

You have until May 21st to register (or to re-register) Republican in California, so that you can vote for Ron Paul.

I've since been sent this list of all libertarian candidates for Republican Central Committee throughout California: 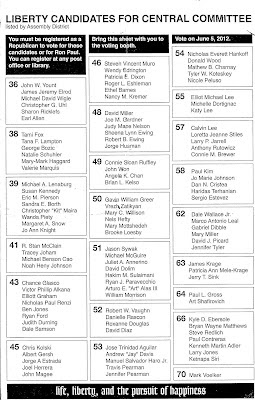 Many libertarians already know that Gary Johnson is pro-war and pro-US tax dollars for Israel, even though Israel is wealthy and can easily pay for its own military. (But why should it, so long as socialist Israel can bilk US taxpayers for money?).

Much has been made about Johnson being a libertarian on economic and social issues. His supporters claim -- "See, Johnson is libertarian across the board!"

Well, no, because even if you're "fiscally conservative" and "socially liberal" -- you're no libertarian if you still support war, empire, and torture.

Here's another video that bears repeating: