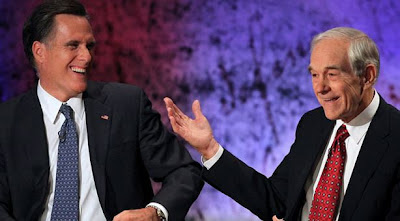 The possibility of a Mitt Romney/Ron Paul 2012 ticket first occurred to me during the South Carolina GOP primary debates. Gingrich was harsh on Romney, whereas Paul was more polite. Paul had placed a strong third in Iowa, and second in New Hampshire. I doubted that Paul could win the GOP presidential nomination, but what if he continued to place strong second or third places in the remaining primaries?

From Romney's point of view, wouldn't a Romney/Paul ticket make sense? I figured it was a crazy thought. No one -- Romney and Paul included -- would go for my idea.

But since then I've seen signs that it could happen.

The media has reported on the close friendship between Romney and Paul. Observers claim that Paul continues to be soft on Romney. Here in Los Angeles (on February 19th), KFI-AM's Gary Hoffmann aired an Odd Couple parody featuring Romney and Paul in the Felix and Oscar roles. Yes, it's kinda lame, doing Odd Couple parodies in 2012. (Listen to Hoffmann's parody here.)

CNN's Wolf Blitzer, among others, has speculated that Paul is soft on Romney because he hopes that Romney will ask Paul's son, Senator Rand Paul, to be his running mate. But I ask, why not ask Ron Paul?

A Romney/Paul ticket has its strengths:

* The GOP can't win with conservative votes alone, and of the GOP contenders, Romney and Paul have the greatest appeal to moderates, independents, and Democrats. Paul is especially popular with libertarians and (formerly pro-Obama) youth.

* Granted, far-right conservatives prefer Santorum or Gingrich, but they hate Obama enough to pull the lever for Romney/Paul. Where else can they go? Not to the Constitution Party, which, like Paul, opposes empire-building and foreign aid.

* Libertarian-leaning Republicans can go to the Libertarian Party, and some will do so if Mr. Romneycare is on the GOP ballot -- unless he's offset by Ron Paul. Paul will stem any exodus to the LP -- especially since he's far more libertarian than some recent and prospective LP national candidates.

Would Romney or Paul agree to a Romney/Paul ticket?

Some might say that Paul is too principled to be Romney's running mate. Paul is principled, but he's also a pragmatist. He served as one of 435 House members. He accepted minority status (1 vs. 434) for a seat at the table of power. For a podium and a voice. Why wouldn't he accept the vice presidency?

Would Romney fear that Paul would be a loose canon? I don't think so. As friends, Romney knows Paul better than that. And despite detractors' attempts to paint Paul as a wingnut, Paul has shown that he can handle power responsibly and be a team player. This doesn't mean that he would “sell out” -- only that he would continue to promote his principles within the system.

Paul has proven that he can't be bought, but he can compromise and be patient in nudging his agenda forward. As someone who admires Paul's foreign, economic, and civil rights policies, I prefer a Paul presidency, but I'd settle for having Paul serve under Romney, daily advising him on policy matters.

A Ron Paul vice presidency may be the best that libertarians can hope to achieve in 2012. It'd certainly beat another symbolic third party vote.
Posted by Thomas at 2:37 AM 2 comments: