The Lesser of Three Evils Is Evil 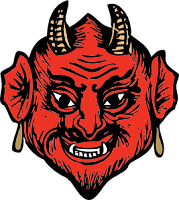 Libertarians often say that The Lesser of Two Evils Is Evil.

The phrase is aimed at people who believe that the Democrats and Republicans are both evil, but that one is less evil. And so they'll vote for they party they consider the "lesser evil." One of the two major party candidates will win, so it's pragmatic to lessen the damage they'll do in office by voting for the less evil candidate.

Libertarians have long countered that people should not vote for a lesser evil, but for a candidate that's actually good. The implication being that the LP candidate is good.

But how often is this true?

The LP's 2012 presidential candidate, Gary Johnson, has his good points. He's better than the LP's Bob Barr or Wayne Allyn Root in 2008. Yet for all that, Johnson remains a lesser evil.

Johnson waffles on foreign policy, making confused and contradictory statements. Yet despite his foggy ramblings, one discerns that Johnson is weak on peace, supports Gitmo, supports aid for Israel, and is pro-intervention.

Johnson also advocates a Fair Tax, which offends some libertarians, but doesn't bother me -- I support the Fair Tax if it means replacing the current system. So for me, the Fair Tax is a "lesser evil" I can live it -- but war and empire are no-compromise issues.

I think most libertarians agree that Johnson is imperfect. But they'll add that Johnson is still "much better" than are Obama or Romney, and so we should vote for Johnson.

Essentially, defenders of Johnson are saying that we should vote for the lesser of three evils.

At the very least, to avoid hypocrisy, defenders of Johnson should stop telling Americans that the lesser of two evils is still evil. Instead they should say, Please vote for the lesser of three evils.

As of now, I plan to write-in Ron Paul for president, as will many other Americans.

Posted by Thomas at 8:26 AM No comments: