Memories of a Not Much Loved President Bush 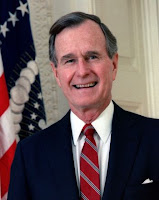 Former President George H.W. Bush died last November 30th. I wrote my own memories about the man and his legacy on December 9th, publishing it in a few places.


Here is what I wrote:

Like Winston Smith in George Orwell's 1984, I see the telling of recent history changing before my eyes. This past week, commentators across the political spectrum praised the late President George H.W. Bush.

But I don't recall him having gotten much love during his political career. ... click to continue.

From the AFP, (June 17, 2018) another example in liberty from The Mideast's Only Democracy!

Jerusalem (AFP) - Israeli ministers on Sunday backed a draft law carrying a jail term of up to 10 years for those who film or photograph soldiers with harmful intent, the justice ministry said.

Critics say the law, which will now face a series of parliamentary debates, could be a threat to free speech.

The ministerial committee on legislation endorsed the bill against "people who film, photograph or record soldiers performing their duties in order to demoralise soldiers and Israeli civilians".

The draft law would give courts the power to imprison those found guilty for five years, although a 10-year sentence would apply to defendants convicted of trying to "harm the state's security".

The same prison terms would apply to people sharing such images or recordings on social media or through traditional media.

Yes, filming active duty Israeli soldiers has proven to be problematic for the Israelis. The article cites the following embarrassing incident:

An Israeli soldier was recently released from prison after serving nine months behind bars for shooting dead an injured Palestinian, an act which was caught on video by a human rights group and spread widely online.

Yes, I know that many Arab nations are just as bad. But the U.S. media and politicians don't incessantly drone on about those Arab nations' stellar commitments to liberty and human rights. Israel's supporters do. So it's only fair to point out the many instances wherein Israel's actions fall short of its propaganda.

We live in an ever more Orwellian society. As recently as the 1970s, conservatives and liberals both commonly said, "I disapprove of what you say, but I will defend to the death your right to say it." -- (Variously attributed to Voltaire or Evelyn Beatrice Hall.)

My, how things have changed. Americans, especially the young, increasingly oppose free speech. Especially if it's "hate speech."


But Daniel DeNicola, professor and chair of philosophy at Gettysburg College, is pushing the Orwellian envelop even further, in an article in Aeon, astonishingly titled: You don’t have a right to believe whatever you want to.

Among other things, DeNicola writes:

Unfortunately, many people today seem to take great licence with the right to believe, flouting their responsibility. The wilful ignorance and false knowledge that are commonly defended by the assertion 'I have a right to my belief' do not meet [William] James's requirements. Consider those who believe that the lunar landings or the Sandy Hook school shooting were unreal, government-created dramas; that Barack Obama is Muslim; that the Earth is flat; or that climate change is a hoax.


My italics. Because I wasn't aware that one could "take great license" with the right to believe. I thought I had an absolute right to my thoughts.

And I do not believe in man-made climate change. So I guess I'm a Thought Criminal?

Believing, like willing, seems fundamental to autonomy, the ultimate ground of one's freedom. But, as Clifford also remarked: 'No one man's belief is in any case a private matter which concerns himself alone.'

Beliefs shape attitudes and motives, guide choices and actions. Believing and knowing are formed within an epistemic community, which also bears their effects. There is an ethic of believing, of acquiring, sustaining, and relinquishing beliefs – and that ethic both generates and limits our right to believe. If some beliefs are false, or morally repugnant, or irresponsible, some beliefs are also dangerous. And to those, we have no right.


Well, I find DeNicola's belief -- that we have no right to certain beliefs -- to be false, morally repugnant, irresponsible, and dangerous.

Anyone know how I might report DeNicola to the Thought Police?

Libertarian Party of California Lies About Its Anti-Discrimination Plank

The May 1, 2018 issue of the Santa Monica Daily Press ran a front page story about the Libertarian Party of California's convention the previous weekend: "Samohi Alumna elected to lead state Libertarian Party."

In it, SMDP reporter Kate Cagle wrote: "Rather than a part of the Republican coalition, the California Libertarian Party's website presents its platform as the  middle between the two dominant parties. They support choice, LGBTQ equality, anti-discrimination laws, private  unions, gun ownership, lower taxes, and privatized retirement options."

Cagle failed to do proper journalistic reseach by reading the LPC's actual platform. However, her false reporting can be partially forgiven because the top of the LPC's platform webpage does misrepresent its position on anti-discrimination laws.

Here's what Cagle saw at the top of the LPC's platform webpage: 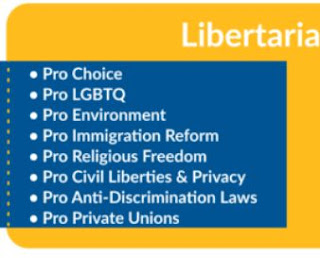 Later that same day, I emailed the following Letter to the Editor to the Santa Monica Daily Press:

Well, no. The "presentation" atop the CLP platform webpage (which Ms. Cagle cites) misrepresents the party's position. Farther down is a link to the actual 2017 platform (the most recent online) which opposes government discrimination, but affirms the rights of individuals and businesses to discriminate. I quote:

"No level of government should deny or abridge the rights of any individual on account of sex, race, color, creed, age, national origin, economic status, marital status, sexual preference, physical ability, mental ability, or place of employment. We affirm that government should not use quota systems based on any of the above criteria.

"We oppose all governmental attempts to regulate private choice in association, including discrimination in employment, housing, and the use of privately-owned "public" accommodations. The right to trade includes the right not to trade--any reason whatsoever. [sic] We also call for the repeal of the so-called Civil Rights Act of 1991 whose self-contradictory provisions force employers to use hiring quotas on the basis of race and sex in order to avoid "disparate impact" lawsuits, but whose provisions make it illegal to use such hiring quotas.

"We call for the repeal of the American With Disabilities Act (ADA), since it imposes mandates on employers to hire individuals they may not wish to hire, such as alcohol or drug abusers and people with personality disorders. Additionally, businesses are told what type of facilities to provide, which violates private property rights, and also discourages employers from hiring low skilled or disabled people."

The entire 2017 platform (all 26 pages) can be found here: https://u1myo26o1t789cb2l4fjwcx8-wpengine.netdna-ssl.com/wp-content/uploads/2017/05/Platform-of-the-Libertarian-Party-of-California-as-amended-in-Convention-April-30-2017.pdf


As of this writing, the SMDP has not published my LTE.

Posted by Thomas at 7:58 AM No comments:

Ted and Laura Brown have relocated from Pasadena, California to Austin, Texas.

Brown is a longtime California libertarian, antiwar activist, and past and current Chair of the Libertarian Party of California. He intends to finish his term as LPC Chair, and will be at the upcoming 2018 LPC convention this April.

Over the past 15 years, quite a few California libertarians I've known have left the Golden State for states with lower taxes and less regulation. Brown joins the exodus. 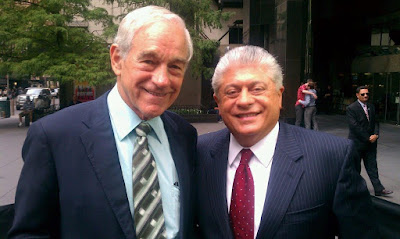