Democrats complain about Russia's alleged interference in the 2016 American presidential election. I don't think Russia did interfere, but either way, it's hypocritical of Americans to complain about it, considering the United States' decades long history of trying in influence foreign elections.

Details about this "media fund" can be found on the State Department's own website, which states:

DRL's goal is to support media outlets operating outside the capital in Hungary to produce fact-based reporting and increase their audience and economic sustainability. The program should increase citizens’ access to objective information about domestic and global issues of public importance, by enhancing local media’s ability to engage a larger audience, including their print, multimedia, and online readership. The program should improve the quality of local traditional and online media and increase the public’s access to reliable and unbiased information.


Lots of gobbledegook about "objectivity" and "fact-based reporting." This is code for reporting that supports the current U.S. trade and foreign policies of globalism and imperialism.

The Hungary Journal goes on to report:

With the upcoming elections in 2018, the Hungarian government considers the State Department’s announcement as "intervention into Hungarian domestic politics".

Group leader of the ruling Fidesz party, Gergely Gulyas was asked about the State Department’s plans to support the media in the Hungarian provinces. He said that it was "an attempt to interfere with Hungary's affairs" and added that similar foreign attempts would not be tolerated by the US political elite, no matter where the money comes from.


The current Hungarian government, led by Victor Orban, has resisted the European Union's attempts (supported by the United States) to dictate immigration policies to Hungary.


The election was held two weeks ago. Of the seven candidates, Commey finished last, pulling 2,598 votes, which was 0.2% of the vote total.

... on July 27, 2000, [Commey] was 22 years old and suffering from delusional disorder and paranoid schizophrenia when he walked onto a Boeing 757 bound for Las Vegas and rushed into the cockpit while brandishing a handgun. ...

He later explained that he had planned to parachute into Antarctica to destroy the "Cabal," a secret organization that wanted to "take over the world through mass destruction."

In the end, the plane never took off and nobody was injured, while Commey was arrested and charged with five crimes, including attempt to commit aircraft piracy. ...

In September 2003, Commey was found not guilty on all counts by reason of insanity. ...

"I spent about 15 years in prison, was never convicted," Commey said. "And it shaped me into the person I am today."

Commey said that government officials and judges refused to let him go for years, despite having doctors say he had fully recovered. "Experiencing my own personal injustice, seeing injustice happen to other guys," he said, "that’s one of the things that had driven me to wanting to get involved to try to change the system."

It also turned him into a Libertarian.

I suppose the LPNY knew of Commey's history. His candidate's website says:

Aaron Commey is intelligent, Resilient and a fighter for justice. Commey's passion for reform was born out of his own experience overcoming his own trials and tribulations with the Justice System and Mental Health Issues.

Aaron is an example of the American spirit that is ready to overcome any challenge and provide opportunities to those who seek it.

Libertarians have a long since developed a reputation for running the most colorful candidates, among them California's Ferret Man, Montana's Blue Man, and Florida's nudist goat's blood drinker. We can now add to the LP's roster of oddball candidates, the skyjacker who hoped to fight the "Cabal" in Antarctica.

World War I: The Tragedy that Led to All the Other Tragedies 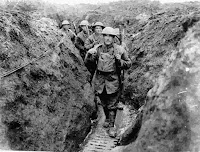 World War I is The Great tragedy of modern Western, and perhaps even world, history. It led to all the great historical tragedies of the last century, not to mention the collapse of Europe from the height of Civilization into chaos and squalor.

Without World War I, there would have been no Bolshevik Revolution, no rise of Mussolini, Stalin, or Hitler. No genocides of the Armenians, Ukrainians, or Jews, hence, no Israel or Mideast wars. No Cold War, hence no proxy wars between the Soviets and Americans. No support for Mao with his tens of millions of victims. No Korean or Vietnam or Central American Wars. No Cambodian genocide. No American Empire.

But if World War I were not avoided, the next best thing would have been a stalemate, with no clear winners. Even a limited victory for the Kaiser would have been preferable to what happened -- Germany's total defeat, its economic destruction via the Versailles Treaty, and the chain of events that followed.

Mike Konrad now has an excellent article in The American Thinker (November 18, 2017), arguing against America's entry in World War I, while unearthing some interesting historical factoids in support of his claim.

You can read Konrad's article here.