Ron Paul accuses Obama of both continuing war, and of neutralizing the antiwar movement on the left:

Posted by Thomas at 9:37 PM No comments:

From a press release, from David R. Henderson:

The Peace Coalition of Monterey County, CA, held a protest rally on Friday, October 2, 2009, calling for the U.S. government to exit Afghanistan rather than follow President Obama's strategy of expanding the Afghan War.

The demonstration was held at Monterey's Windows-on-the-Bay Park on Del Monte Avenue, from 5 to 7 p.m. It marked the 8th anniversary of the bombing of Afghanistan by the U.S. government.

Peace Coalition spokesman David R. Henderson said: "Eight years is enough. In fact, it's too much. The war should have ended on President Bush's watch. Now it's to up to President Obama to correct Bush's mistake." 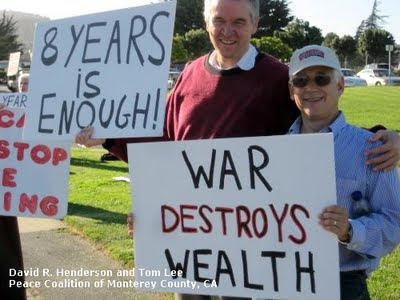 Henderson said the original purpose of making war on Afghanistan was to capture Osama bin Laden, but now it is to nation-build. "Like many government programs, the program outlasts the original rationale and so the rationale keeps changing."


Henderson noted that historians call Afghanstan "the graveyard of empires," adding that, "Both Britain and the Soviets were hobbled by their attempts to colonize Afghanistan. Why does the U.S. government think it will fare any better?"
Posted by Thomas at 10:19 PM 4 comments:

The Executive Committee of the Libertarian Party of California has suspended publication of California Freedom, indefinitely, due to financial constraints.

They hope to resume publication next year, after finances have improved.
Posted by Thomas at 10:56 PM 1 comment:

The following is written by Lawrence K. Samuels, editor and contributing author to Facets of Liberty: A Libertarian Primer, and co-chair of Libertarians for Peace of Monterey County:

Tea Parties have reconnected the cooperation between conservatives and libertarians that harks back to their mutual opposition to FDR's big government. But a host of these newly forged alliances have not taken hold. An undercurrent of ill-fitting philosophies and anti-intellectual clashes suggest that, at many Tea Parties, freedom is not always brewing.

I helped create a nine-member board for the Monterey County Tea Party after an April 15, 2009 demonstration that attracted 600 sign-carrying protesters. The match seemed perfect. We all agreed on a mission statement that supported smaller government, lower taxes, the U.S. Constitution, and the Bill of Rights.

Libertarians wanted to include a non-interventionist plank, but, under pressure, were willing to forgo it for the sake of a peaceful alliance.

But after a successful Fourth of July Tea Party parade and Freedom Rally in Monterey, the cracks in the alliance split wide open.

I was accused of belonging to too many leftist organizations.

The fur first hit the fan when Monterey CodePink asked to be one of the co-sponsors of the Tea Party Freedom Rally. I loved the idea of uniting the antiwar and anti-tax crowds. But this possible alliance alarmed conservatives.

Left and Right dehumanize each other daily on talk radio and cable news, so I should not have been surprised by the conservatives' determination to share no common ground with any leftist organization.

To calm their fears, I put the issue in perspective. Nationwide, CodePink follows a socialist agenda; no argument there. But the Monterey branch of CodePink has worked with libertarians on both antiwar and anti-tax issues for years. The local Monterey CodePink leader was one of the most active signature-gathers in trying to abolish the utility tax in Seaside.

Next, I was accused of being too involved with the Libertarian Party -- as if Libertarians were responsible for the financial meltdown, bailouts, and stimulus packages.

These conservatives wanted no association with Republicans or Democrats either, saying that both political parties had caused our current problems. But they were also upset with Tea Party Board members who held leadership roles in the LP.

It did not matter that libertarians were heavily involved in starting the Tea Party movement back in 2008 -- nor that the original 1773 tea partiers at Boston Harbor were classical liberals (libertarians), not Tories or conservatives.

These Tea Party conservatives were neophytes. Never before had they been involved in political activism. Some had never heard of Congressman Ron Paul.

Prof. David R. Henderson, one of the libertarian Tea Party Board members, described this curious phenomenon as "activism without ideals." I thought my phrase captured it best: "A cause without a rebel."

As demands intensified to purge libertarians, we got the feeling that the purgers fit the category of "reactionary" since they seemed to know only what they were against, not what they were for. They never pointed to any philosophical differences they found objectionable. It was as if they were devoid of ideas, marooned with empty rhetoric and no real solutions.

One of my major crimes was distributing copies of my book, Facets of Liberty. This occurred at a Tea Party event billed as a "mixer." I was later told that I should not have passed out educational material, nor mixed with the crowd.

It did not help when we asked these rookies embarrassing questions. We asked them why they had done nothing when President Bush bailed out the banks and auto companies, spent money like a drunken sailor, bashed civil liberties, and advanced socialized medicine with the Medicare Prescription Drug law, a program that some in Congress estimated will have a price tag of $1.2 trillion by 2016.

Our questioning rubbed their noses too deeply in their ignorance.

That failed to stop us.

Libertarians soon formed the Liberty Tea Party, and, to set up a large tent, invited everyone to join a more enlightened Tea Party.
Posted by Thomas at 8:50 AM 9 comments: