Mormons on Israel and the Palestinians 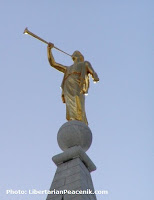 Since Mitt Romney is the likely GOP presidential nominee, his Mormon faith, and how it might influence his policies on war and peace in the Mideast, will likely be key issues in the 2012 race.

There is reason to believe that Romney, like most past U.S. presidents, will be blindly pro-Israel. The New York Times has reported on the close friendship between Romney and Bibi Netanyahu ("A Friendship Dating to 1976 Resonates in 2012," by Michael Barbaro, April 7, 2012):

[I]n 1976, the lives of Mitt Romney and Benjamin Netanyahu intersected, briefly but indelibly, in the 16th-floor offices of the Boston Consulting Group, where both had been recruited as corporate advisers. At the most formative time of their careers, they sized each other up during the firm's weekly brainstorming sessions, absorbing the same profoundly analytical view of the world.

That shared experience decades ago led to a warm friendship, little known to outsiders, that is now rich with political intrigue.

Mr. Netanyahu, the prime minister of Israel, is making the case for military action against Iran as Mr. Romney, the likely Republican presidential nominee, is attacking the Obama administration for not supporting Mr. Netanyahu more robustly.

That's not good news for peaceniks.

But if Romney is elected, I hope he will recall that the Mormon faith advocates an even-handed approach to Jewish-Israeli/Muslim-Arab relations.

I'm no expert on the Mormon faith, but I was pleased to find this on an LDS website ("Orson Hyde's 1841 Mission to the Holy Land," by David B. Galbraith, October 1991):

It was perhaps inevitable that the gathering of the Jews and the creation of their modern nation would lead to a clash between political zionism and Arab nationalism. Few members of the Church fully appreciate the dimensions of this confrontation. In what has become a classic address, President Howard W. Hunter observed:

"Our Father loves all of his children. He desires all of them to embrace the gospel and come unto him. Only those are favored who obey him and keep his commandments.

"As members of the Lord's church, we need to lift our vision beyond personal prejudices. We need to discover the supreme truth that indeed our Father is no respecter of persons. Sometimes we unduly offend brothers and sisters of other nations by assigning exclusiveness to one nationality of people over another.

"...Both the Jews and the Arabs are children of our Father. They are both children of promise, and as a church we do not take sides. We have love for and an interest in each. The purpose of the gospel of Jesus Christ is to bring about love, unity, and brotherhood of the highest order."

Some of our Arab/Palestinian friends express concern about Elder Hyde's prayer because they feel anything that favors the Jews must oppose them. On the other hand, some of our Jewish friends have a tendency to interpret the prayer as conferring political support for their cause. Even members of the Church are sometimes confused as to how the prayer is to be understood.

The scriptures and the modern prophets clearly teach that all father Abraham's children have a place in the Lord's plan, and our Arab/ Palestinian friends are a part of this group.

Latter-day Saints need to be more sensitive to the hurt, disappointment, and even anger created among our Arab/Palestinian friends when we blindly attribute divine approbation to all that takes place in that part of the world we call the Holy Land.

Posted by Thomas at 1:10 AM No comments:

How Political Third Parties Can "Win" 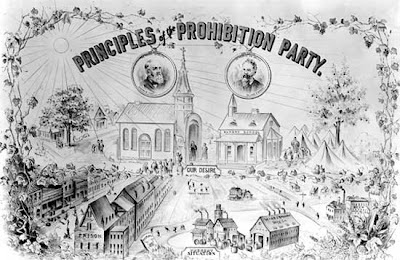 I've long argued that political third parties should not worry about offending voters with "extremist" positions -- because (barring societal collapse) no third party will ever supplant one of the two major parties in the U.S.

There are structural reasons why this is so. For one thing, if a third party's position on an issue becomes popular, then one or both of the major parties will co-opt that position. The Democrats and Republicans both began co-opting the various socialist parties' economic policies after 1933.

If third parties wish to influence public policy, they must focus on changing the culture. On changing attitudes and opinions. This means fearlessly promoting their principles (i.e., the dreaded libertarian macho flash). Once such uncompromising promotion influences enough voters, one or both of the major parties will implement that third party principle into a concrete policy position.

I've cited the socialist parties' successes as an example. Richard Winger, at Independent Political Report (comment 18), offers the Prohibition Party as another example:

Prohibition Party cost the Republicans two presidential elections, 1884 and 1916. After the 1884 election the Prohibition candidate, John P. St. John, was hung in effigy or burned in effigy all across the north, but angry Republicans.

This shows the power of minor party voters. "Spoiling" is a stupid name but it is a potent weapon and voters should not be intimidated into being afraid to use it. It is one of the few ways a small minority can have some leverage.

Also never forget, in 1776 only a minority of Americans supported independence from Britain. You don't need a majority to change history.

Posted by Thomas at 3:31 AM No comments:

When George Bush Was a Man of Peace

Back in 2000, I made the mistake of voting for George Bush when he ran for president. I did so because I was sick of Bill Clinton in general, but mostly because of Clinton's many wars and military invasions (e.g., the Balkans, Haiti, Somalia, Iraq, Sudan).

Sure, I preferred Harry Browne. But I didn't want to "waste my vote" on a third party. (Although I was long a card-carrying Libertarian Party member, I wasn't active in the LP -- apart from supper clubs -- until 2004, when I attended my first Libertarian convention.)

Seems silly now to have voted for Bush. Possibly the worst vote I ever cast.

Yet Al Gore was of the Clinton regime. Clinton, whose Secretary of State, Madeleine K. Albright, said in 1993, "What's the point of having this superb military you're always talking about if we can't use it?"

But what cinched it for me was that both sides claimed that Bush would ignore foreign policy. Progressives like to forget that today, but in 2000 they attacked Bush by saying that he would be a "do nothing" president.

I figured if both Democrats and Republicans claimed that Bush would be a "do nothing" a president, then it was likely true.

Yup, progressives meant that as an insult.

Unfortunately, Bush did what progressives originally wanted, and took an active foreign policy. Ironic, no? Someone should have told those progressives to be careful what they wish for.

Consider that C-SPAN clip, above. Bush sounds almost like ... a radical libertarian.

Posted by Thomas at 8:37 AM No comments:

A slight uptick from December to February, but an overall steady decline.

Phillies's remark may be found at comment 16, at Independent Political Report.

Gary Johnson has a new video in which he promises to bring home US troops from Afghanistan "immediately" (i.e., in 2013), as opposed to 2014 (which is what Obama and Romney are promising).

Sounds good -- except that this is a major retreat for the Libertarian Party. At the 2004 Libertarian Party convention, Michael Badnarik advocated withdrawing all US troops from every foreign nation, and closing all US military bases overseas.

Badnarik advocated withdrawing US troops from "135 countries" -- not just from one. Quite a bit more than Johnson's position: A withdrawal from one nation, one year earlier than the Democrats' and Republicans' timetable.

Also, compare Johnson's wishy-washy above video to this Ron Paul video below:

Johnson's video dares not morally judge US foreign policy. He says the US should leave Afghanistan, but does not say why. At most, he implies that it's economically unsound for the US to stay there.

He even engages in a bit of tough talk, from which one may infer: "Don't worry, we'll still have lots of troops elsewhere in the world, so we'll still be the biggest badass on the block."

Posted by Thomas at 9:36 AM No comments: