This November, three candidates will be opposing Waxman.

Libertarian Erich Miller's website is silent on the war. If I emailed him, pressed him to the wall, he might mumble something about being anti-foreign intervention. I don't know -- and I don't care. It's Miller's job to earn my vote by advocating the correct positions on the key issues. And he's not doing it.

Miller is running for Congress. Since we're "at war," foreign policy will be a big part of Miller's Congressional responsibilities -- yet his website only focuses on the economy and health care. For whatever reason, Miller hasn't found it worth his while to say anything about foreign policy.

Maybe Miller is afraid of offending someone and losing votes?

By contrast, the socialist Peace and Freedom Party candidate, Richard Castaldo, advocates the following positions on his home page:


1. Defund all wars of imperialism, including Iraq, Afghanistan, and Pakistan.

4. Terminate the Patriot Act and restore the Bill of Rights.

Two out of five of Castaldo's positions (1 and 4) directly, aggressively, and unapologeticly address the core issues of our expanding wars and increasing loss of freedoms.

Why is the socialist Peace and Freedom Party more vocally libertarian on these key issues than the so-called Libertarian Party?

Do you see why I'm no longer a registered Libertarian? Why I've registered non-partisan and ignore party labels?

I'm not saying who I'll be voting for this November. But antiwar voters should educate themselves about every candidate, in every state and district. Then vote based on the issues that the candidates advocate (vocally and aggressively, not buried in some fine print). Don't waste your vote on something as meaningless as party labels.

Libertarian candidates must earn votes from libertarians, not be given votes simply because candidates have an L before their names.
Posted by Thomas at 10:30 PM 6 comments:

In this time of rising bigotry against our fellow Americans who happen to be of Muslim heritage (including some "libertarians" who engage in hate), it's good that Hollywood has produced some films that reflect the humanity of Muslims.
Posted by Thomas at 11:55 PM No comments:

An Eyewitness Reports from Inside Afghanistan

This article was written by Mark E. Smith and posted on the Peace Movement Google Group on September 5, 2010. It's written from a progressive, rather than a libertarian, perspective. Nevertheless, because Mr. Smith lived among the Afghans and writes from first-hand experience, his insights bear consideration.

With his permission, I reprint Mr. Smith's article:


I lived in Afghanistan for almost five years in the late '60s, early '70s. I went there on my own and was not connected with any governmental or nongovernmental organization. I volunteered in a hospital and ran a free clinic in my home. I learned Pashto. I spent most of my time with Afghans rather than with Americans.

Afghanistan does not have a common language. It has two major or official languages, Farsi (Persian) and Pashto, but there are about 30 other languages.

Whether you do or don't have a gun, as long as you don't attack them, the Afghan people have a tradition of welcoming strangers and are very friendly and hospitable. As all Afghan males usually have guns, they don't see anything wrong with strangers having guns, as long as they aren't hostile or part of an invading army.

Many Afghans have traveled to or have relatives in the U.S. and Europe. They know what modern development has to offer, and they don't want it. They certainly don't want roads, as roads would only make things easier for invading armies.

Why bring in solar panels and storage batteries when they already have a sustainable green system? Donkeys and camels don't have to be produced in capitalist sweatshops out of raw materials gained through genocidal resource wars; they reproduce naturally. And they provide fertilizer instead of toxic wastes that are impossible to dispose of. Donkeys and camels are totally organic, sustainable, and biodegradable. I don't know of any green energy source that you can say the same about.

As for the opium poppies, if the CIA didn't need heroin profits to fuel its black budgets, Afghans would grow no more opium than they did when I was there, some for herbal medicinal use, and some for barter. They had no drug problem because they didn't use it recreationally and they weren't desperate enough to need it to drown out reality the way many westerners do.

Americans seem to think that everybody wants to be rich. Most Afghans would be ashamed to be rich, as it would mean that they hadn't shared their good fortune with their neighbors and had hoarded it for themselves, a disgrace that could easily see them ostracized.

One Afghan once told me, "Most Americans are rich, but you're an American and you aren't rich. I'm poor, but that's okay because everybody here is poor. But it must be terrible for you to be poor in a rich country." This was an illiterate Afghan who had never been to school. I know many Americans with doctorates who aren't half that astute.

They don't need education either. We have education for jobs that don't exist and I've spent seven decades of my life watching our educational system decline.

The Afghan people are moderate Muslims when they're not being attacked. When they're invaded, they expect the religious warriors among them to lead the fight to drive off the invaders, so they become more militant, but it doesn't last once the invaders are gone.

As for the treatment of women, when I was in Afghanistan there was no prostitution. Women were sold into marriage, not sold to pimps and brothels. Most Afghan men love their wives and children.

Do you judge the U.S. by abusive husbands, brutal pimps, exploitive pornographers, and the other types of male bovine excrement that abound in our society?

The Taliban were nothing and had no power until we started funding them to fight the Russians. The Russians had done things in Afghanistan that we considered totally unacceptable, such as allowing women equal rights, funding schools for both girls and boys, providing free health care, etc. We destroyed the Soviet Union because we abhor Communist crimes like that. Our oligarchs fear that if such heresy spreads, it could interfere with their corporate profits.

I remember the first time I tried to take a taxi at the Khyber pass. There were several empty taxis, but they were unattended. One taxi had five ferocious looking men in it, all with turbans or those pancake hats, beards and mustaches, rifles, and bandoliers full of ammunition. They kept smiling at me and gesturing to me to get into their taxi, but I was terrified--certain they intended to rob me.

Finally somebody who spoke English turned up and he explained to me that the taxi couldn't leave until it had a full load of passengers and they only needed one more. It turned out to be a pleasant ride and was my introduction to overcoming stereotypes.

Understanding the world is a long journey, so I pass along to you the standard Pashto greeting, "St'rai m'shee," which means, may you not be tired.
Posted by Thomas at 9:28 AM No comments:

Why Did Jesus Instruct His Apostles to Buy a Sword? Luke 22:36

When seeking Biblical support for their notion of a militaristic Jesus, Neocon warmongers sometimes quote Luke 22:36.

First, some context. This scene from the Gospel According to Luke occurs during the Last Supper. Jesus is addressing his apostles, shortly before he is arrested and crucified.

Is Jesus telling his apostles to prepare for combat? Perhaps to overthrow the Roman Empire? Or maybe just a defensive battle against the Jewish religious leaders (soon to arrest him) or the Roman governor (soon to convict him)?

Neocons have used this verse to justify our current wars. But is this verse even about war? 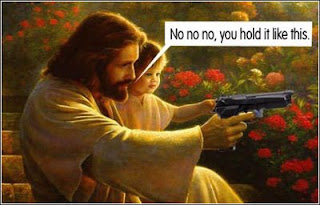 Let's examine this quote in context, reading what comes before and after this verse. Here is what Luke 22:35-38 states:

That's odd. Two swords? Among twelve apostles? Two swords hardly seem enough to battle an empire, or even a garrison of guards.

Seems this context changes things. It's a key to understanding this verse. Seeking a Catholic understanding, I look to the commentary in the Navarre Bible. Its commentary for Luke 22:35-38 states:

Jesus announces his passion by applying to himself the Isaiah prophecy about the Servant of Yahweh (Is 53:12) -- "he was numbered with the transgressors" -- and by pointing out that all the other prophecies about the sufferings the Redeemer would undergo will find fulfilment in him.

The testing-time is imminent and our Lord is speaking symbolically when he talks about making provision and buying weapons to put up a fight. The apostles take him literally, and this leads him to express a certain indulgent understanding: "It is enough."

"Just in the same way as we," Theophylact says, "when we are speaking to someone and see that he does not understand, say: 'Very well, leave it.' " (Enarratio in Evangelium Lucae, in loc.).

So it seems Jesus spoke symbolically of swords, not literally. This interpretation is also consistent with one of the Gospels' recurring themes: the apostles' repeated misunderstanding of Christ prior to his resurrection.

If you're curious, my edition of the Navarre Bible is "the Revised Standard Version with a commentary by members of the Faculty of Theology of the University of Navarre." A great source for a Catholic interpretation.

According to its Preface: "The commentaries contained in the notes are the result of looking up thousands of sources (sometimes reflected in explicit references given in the commentary text) -- documents of the Magisterium, exegesis by Fathers and Doctors of the Church, works by important spiritual writers (usually saints, of every period) ... The editors felt that it would have been impertinent to comment on the Bible using their own expertise along;

If anyone ever throws Luke 22:36 at you in support of war, saying that it's time to buy a sword, ask him why Jesus said that only two swords were "enough."
Posted by Thomas at 12:57 AM 3 comments: