Ron Paul has called for ending the CIA. It's the sort of uncompromising, antiwar talk you don't hear Wayne Allyn Root saying on Fox News. 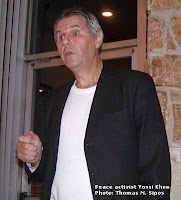 The club was a little noisy at times. Another group was eating in the same back room at Dinah's Restaurant. But you can still hear Khen's talk fairly well.
Posted by Thomas at 11:18 PM No comments:

Back in the summer of 2006, I wrote a screenplay, Pentagon Possessed: A Neocon Horror Story.

Pentagon Possessed is an X-Files parody set against recent history. In my script, two FBI agents discover that dark supernatural forces were behind the Patriot Act, and America's entry into the Iraq War.

A reader for the Slamdance Screenplay Competition wrote in the coverage report: "The writer's awesome research into the details of the disinformation generated by the Neocon cabal within the government, in order to justify the invasion of Iraq, suggests strongly this should be a television docudrama, as the genesis of the Vietnam War was treated in John Frankenheimer's HBO presentation, The Path To War (2003). The scenes in the script based on this research are quite good, with a strong accent of mockery of the participants that is quite entertaining. For entertainment value, such a docudrama would beat Michael Moore's Fahrenheit 9/11 all to hell."

Pentagon Possessed is a satirical horror story that reminds us that governments will use fear of a foreign enemy to suppress civil liberties at home. That war is the health of the state. And that questioning authority is patriotic.

Despite some favorable attention in Hollywood, Pentagon Possessed was never bought or produced. Perhaps someday...

But in the meantime, I am making Pentagon Possessed available to the general public as an Amazon Kindle ebook.
Posted by Thomas at 7:20 PM 2 comments:

In 1979, QED/Harper & Row Publishers released Robert J. Ringer's Restoring the American Dream. I read it in the early 1980s, and a passage stuck with me all these years; about the possibility of the LP becoming as corrupt as the Democrats and Republicans.

And really, why not? There's nothing magical or sacred about the LP. It's not a party of angels, or saints, or fictitious John Galts. It's a party of mere mortals, with all the usual human weaknesses and moral failings.

I've now looked up this passage for the first time after nearly 30 years. It's still there, as I remember it (on pp. 288-89 of Ringer's hardcover edition):

"The most disconcerting thing about the Libertarian Party is that it is a political party. While the party platform (a copy of which I strongly urge you to read) clearly spells out across-the-board freedom for everyone, much more so than even the Declaration of Independence, one cannot escape the Four Great Political Realities, particularly the fact that a politician must lie in order to get elected and, once elected, must commit aggression to make good on as many campaign promises as possible.

"If Libertarian Party leaders are serious about their total-freedom philosophy, the practical question is, how will they ever get a presidential candidate elected on a platform that does not promise short-term, something-for-nothing solutions to expediency-minded voters? ...

"I once asked John Hospers, the Libertarian Party's first presidential candidate (1972), if the realities of The System would not eventually corrupt Libertarian office holders even if the Party did succeed in gaining the presidency. His answer was very straightforward and practical. He said that indeed that was a possibility, but that it might take fifty or a hundred years for the Party to become as corrupt as the Republicans and Democrats.

"In the meantime, not only would the people of this country enjoy fifty to a hundred years of drastically increased freedom and prosperity, but they would be buying considerable additional time in which to come up with alternatives to our present system before it collapses."

I think Hospers was overly optimistic. He suggested the LP might become as corrupt as the Demopublicans in about 50 to 100 years after attaining power. Yet the LP is already morally decaying even before attaining any power.

The LP is diluting its principles on antiwar, and other issues, for the mere possibility of, hopefully, maybe someday, attaining a smidgen of token power.

I've written before about the LP's craven sellout of principles in return for political crumbs.

Ironically, Hospers is himself an agent of corruption within the LP, endorsing Bush for President and supporting U.S. empire in general (albeit not his choice of words), and the Iraq War in particular. For instance, Hospers took the pro-war stance during a debate with Gary Nolan at the 2005 Libertarian Party of California state convention.

However, Hospers earlier wise words (from the 1970s) always stuck with me. The LP is just another party, like the Dems and GOP. Having an L before one's name is no more meaningful than having a D or an R.

Libertarian candidates and party officers brag that, unlike Republicans, they really stand by their small government principles. But how do we know this? How do voters know this? Libertarians have not much been tested.

The LP is already so full of opportunists (e.g., Wayne Allyn Root, whose "principles" and positions flip flop), I don't think the average Libertarian officer holder would be any more "principled" in practice than a Republican or a Democrat. Libertarians often talk a good game, but they've yet to prove themselves.

Of course, Ron Paul has proven himself to be a principled antiwar voice. But then, he has an R rather than an L before his name. (As if letters mattered.)
Posted by Thomas at 1:50 AM 5 comments: