On yet another Wayne Allyn Root thread at Independent Political Report, Thomas L. Knapp explains why so many of Root's critics attack "Root the man" rather than just Root's positions. Knapp's points are spot on, and worth repeating... 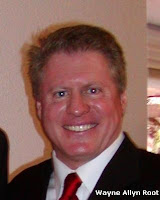 "You seem to think that this [Root's positions] is separable from character issues.

"With some people, it can be. With others, it's not.

"With Root, it's generally not because he is exceptionally, for lack of a better descriptive term … Clintonesque.

"If he launches an unjustified attack on someone and it backfires on him (e.g. Ruwart), he'll throw a staffer under the bus as the real author of the attack rather than confront the substance of the issue he brought up when that substance is going against him.

"If he takes a position and later finds embarrassing (e.g. his late 2006 endorsement of a McCain/Lieberman 2008 ticket), he'll just lie about it when confronted with it.

"Hell, sometimes he changes his positions so fast that it's hard to keep track of them at all, and arguing 'substance' becomes impossible. If you address the X that he said on Fox last week, he'll just come back with the opposite of X that he said last night at an LP fundraiser, or the orthogonal to X that he threw out in a radio interview this morning.

"How do you peg the 'substance' of someone who goes from 'Ron Paul is an old guy with some decent ideas but bad on foreign policy' to 'I'm Ron Paul on steroids!!!' so fast he leaves skid marks and takes out a couple of telephone polls making the U-turn?

"It's impossible to tell what the 'substance' of Root is from one day to the next — or, at any given moment whether that substance is the real thing or just another pitch to get over on the rubes."

Kudos to Knapp for hitting the nail on the head. See the entire thread here.
Posted by Thomas at 7:59 AM

It's kind of funny that in a year when the Libertarian Party didn't elect a single member to any public office higher than Soil&Water Board, how do some of the LP activists react? By making the Party smaller. Kick out any and all those who actually know a thing or two about real world politics and getting national media attention.

The more the LP pushes people like Root away, the more the libertarian Republican movement will grow.

Trust me, we libertarian Republicans are laughing at you all from the sidelines.