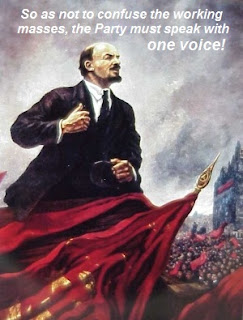 After the Libertarian Party of Nevada dissolved its county parties, it offered, as part of its rationale, the need to speak with one voice and promote one message to the public. They didn't want the county LPs to issue independent or conflicting messages. As the Nevada LP said in a press release:

“...our primary reason for this change was to more effectively pursue Libertarian goals of identifying and electing qualified Libertarian candidates statewide by creating a single source of a unified, positive message...

“Without adequate coordination, the voting public is getting mixed messages from different parts of the LPNevada as county affiliates often focus on issues of little importance to mainstream voters...."

According to the Nevada LP, the goal is to elect candidates. Allowing the county parties an independent voice impedes that effort. Too many voices, too many opinions.

The Nevada LP is lying.

A few years back, when the pro-war control freaks were on the out (at least here in California), they whined that it was “divisive” to publicly say that the LP was antiwar.

No one tried to squelch their right to voice their pro-war crap, but having a voice was not good enough for them. Since they were a small minority, their pro-war screeds would have been drowned out -- so they instead wanted all libertarians (pro and antiwar) to shut up about the war, because “it's an issue over which libertarians of good faith disagree.”

Now it seems that the pro-war control freaks are in charge of the Nevada LP. (I say this because Nevada LP Vice Chair Wayne Allyn Root supported the dissolution of the county LPs.) And these control freaks are not satisfied with having the state LP bully pulpit (the loudest voice) -- they want the other, smaller voices to shut up.

Here in California, it's long been customary for every LP -- the state LP, county LPs, and even regional LPs (the Los Angeles County LP is divided into 8 regions) to issue their own press releases, and pass their own resolutions. County LPs are independent entities, entitled to their own voices in the public arena.

This is a Good Thing.

When I was editing the state newspaper, I always allowed, and even invited, pro-war LP members to submit articles and letters to the editor. I was satisfied that, because antiwar libertarians were the majority, and had the better arguments, that we had nothing to fear from giving a platform to the pro-war crowd.

But the Nevada LP control freaks (of which Wayne Allyn Root is one) don't see it that way. Now that they're in charge, they want to be the sole voice representing Libertarianism.

I don't know how big a factor the war issue was in the Nevada LP's dictatorial action, but I suspect that, overall, this conflict falls along the usual Reform vs. Radical divide. A “Reform faction” (now in charge) prioritizes vote-getting, and thus wants to avoid hot-button issues like ending the drug war, opening borders to immigration, ending foreign bases and foreign aid (even to Israel -- gasp!), ending the police state, downsizing the military -- things that “normal Americans” don't feel comfortable with. (Or so the Reformers claim to believe.)

When Radicals are in charge, they dominate the debate.

When Reformers are in charge, there is no debate.

At least that's how it seems to work out.

At least Mao Zedong paid lip service to pluralism, saying that Communism should "Let one hundred flowers bloom.” Not so the Nevada LP.
Posted by Thomas at 3:55 AM