Last June, I brought the libertarian message to Glendale Community College. On July 29, I brought much the same message to L.A. Trade Tech (located in downtown Los Angeles). 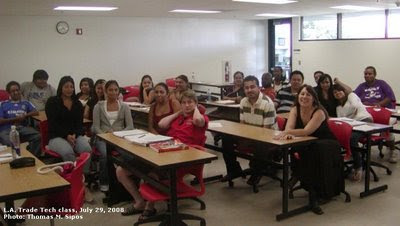 Among other things, I discussed the Libertarian Party's opposition to hate crime laws. I said that hate can best be fought through private means. As an example, I cited how the Kentucky LP dumped their U.S. Senate candidate, Sonny Landman, after Landham's bigoted, anti-Arab remarks.

Yet it now appears that I may have spoken too soon. The Kentucky LP is still considering what to do about Landham.

This is shameful and disturbing behavior on the part of the Kentucky LP. I was proud to tell the college kids at L.A. Trade Tech that the LP cleaned its own house--is that not so?

As far as I could see, there were maybe two white kids in the entire class. The rest of the students were Asian, Latin, Indian, black, etc. Los Angeles is the future face of America. (One student asked about the LP's immigration policy; I said most of us favor open borders.)

Are we telling future Americans that we oppose hate crime laws, and accept bigots into the LP?

On the day I spoke, the Green Party, and Peace and Freedom Party, also sent representatives. If the Libertarian Party does not demonstrate its opposition to racism and religious bigotry, these other third parties will be more appealing to future Americans.

I urge the Kentucky LP to dump Landham, whatever the consequences. If they, or some of their candidates, lose ballot status, so be it.

To paraphrase L.A. Libertarian officer Bob Weber (who posted at Independent Political Report): the Kentucky LP made this shit sandwich, now they must eat it.
Posted by Thomas at 9:15 AM