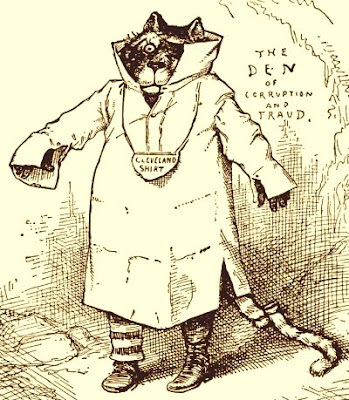 Libertarian Party watchers have long suspected that a group of pro-war/Republican Lite control freaks (sometimes dubbed The Starr Chamber after former LNC treasurer Aaron Starr) have conspired to dominate or manipulate the LP.

Their goal was to advance their petty power and pro-war/ Reform faction policies.

"Now that I [Ed: Stewart Flood] am not on the LNC, I believe it is time to set some of the record straight, and blow the lid off several of the greatest conspiracies the Libertarian Party has seen...

"The Starr Chamber is not gone. They have quite a few members on the LNC and they will do their best to follow the marching orders they have been given. Yes, they actually hold secret meetings...

"I am no longer on the LNC, so I have no reason to not admit that there are secret meetings where a majority of the LNC decide in advance how to vote and where motions are written and given to members on cue cards. Mr. Starr was usually the chair of the meetings that I attended. He continued to do this (over my objection) after he was defeated in his re-election bid for office...

"Remember, I know the real plan. A few other people have figured it out on their own without being told. It is really quite clever, but this convention was a major setback for them. I have never supported or agreed with what they want to do to the party...

"The major hooded key holders of the inner circle are gone, leaving only five or six of their pawns on the LNC.

Flood does not state this group's goal. But from my own observations, these people are mostly Party Cultists, supporters of Wayne Allyn Root, and generally pro-war.