Hazim Kira described the American Muslim Task Force as "an umbrella organization of all Muslim organizations in this country, focused on civil rights and elections." Their booth at the LP convention had two goals. "To create a dialog between the Libertarian and Muslim communities. And to get Muslims to become part of the Libertarian Party." 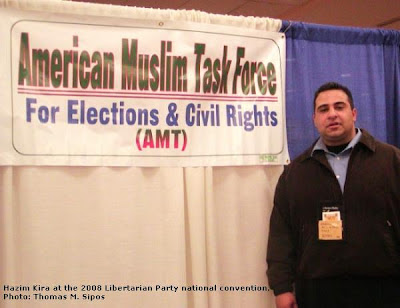 Stressing that Muslims are not monolithic, Kira said that different planks of the LP platform appeal to different Muslims, including economic freedom, foreign policy, less government, separation of church and state, and "especially civil rights."

Do some Muslims agree with the entire LP platform? "Absolutely, yes," said Kira.

One California Muslim, Maad Abu-Ghazaleh, ran for Congress on the Libertarian ticket in 2002 against Democrat Tom Lantos. Abu-Ghazaleh got 7% of the vote. The Republican got 25%.

The AMTF is non-partisan and encourages Muslims to participate in the political process, whether as a Republican, Democrat, Green, Libertarian, or whatever party best represents an individual Muslim's principles.

Kira added, "There is a verse in the tradition of The Prophet that says, 'Follow the law of the country that you are in.' We want Muslims to be part of every party. [This booth] is our attempt to get them to know what the LP stands for."
Posted by Thomas at 6:05 AM

Salaam Alakium wa Rahmutulla,
I'm muslim and I love libertarianism and capitolism and I recommend that those interested in either read Atlas Shrugged by Ayn Rand. Thats perhaps the best 'non-religious' advice I can give to anybody.

There are many Libertarian Muslims, a good place to look if you want to find or speak with some is here http://www.facebook.com/pages/M4L-Muslims-for-Liberty/184980181552836

you can also find a video series on Libertarianism and Islam here http://www.youtube.com/user/MuslimsforLiberty?feature=g-all-u

you can also find radio interviews with libertarian radio shows and podcasts with the same group with a quick google search.

hope this was helpful