Most Bob Barr delegates were identifiable from their dark suits and cowboy hats. At least, that's how it seemed to non-Barr delegates.

One notable exception was Sherman Ball, who is perhaps unique in being the only delegate at any LP convention ever to sport a more colorful appearance than Starchild. 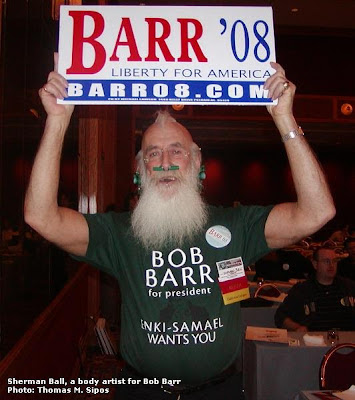 "I was wondering who he was," said Ball of Starchild, while telling me his own story.

Ball was discharged from the U.S. Air Force with the rank of captain in 1972. He was active in the early years of the LPC, then left. He only recently rejoined, inspired by Ron Paul and Bob Barr.

Explaining his support for Barr, Ball said, "I want to do some damage to the Republican or the Democrat party. The one-party system we got now is basically statist. We have a chance with Bob Barr to bloody at least one of the parties, and get ourselves established as a real party. He has national name recognition. He's been a member of the Libertarian National Committee for a couple of years.

"Almost everything is haywire in this country. The increasing regulations. The phony climate change thing, which mankind has nothing to do with. It does it by itself. The sun is responsible. The orbit of the Earth. We have no control over it. McCain has proposed an agenda to control every aspect of our lives in the name of this mythical, man-caused global warming."

Ball wears a Sumerian Libertarian t-shirt because, he says, "all of our Western civilization came out of Sumeria," making it the birthplace of liberty.

Regarding his piercings and tattoos, does he prefer to be called a body artist, or a member of the body alteration community, or what?

Sherman is awesome! I thoroughly enjoyed working with him at the convention in Denver.

sherman is the king of information!

sherman is a real tea party guy but drop the chem trail fantasy..it is NO different than the climate change scam

as a leader in the libertarian party here in monterey...i feel sherman has overstepped his duties in bringing into our message the chem trail issue..lawrence is working hard to stop this from taking over our party....